In nature, camouflage can be a matter of life and death. The ability to blend into one’s environment is a crucial survival tactic for both predators and prey animals. For hunters, being unnoticeable helps them capture their victim much more easily and for the hunted one, it increases its chances of being undetected by the predator. 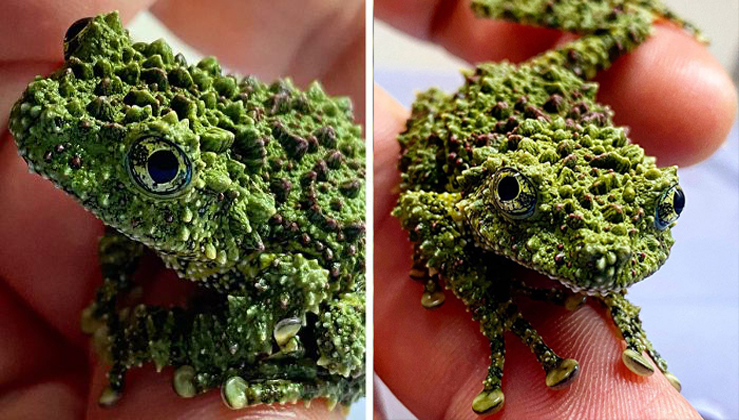 Consequently, there are many oddly-colored animals out there who cannot be easily spotted by just anyone. One of those camouflage experts is Theloderma corticale, more commonly known as the Vietnamese mossy frog. This species of frogs got their name from their appearance. The unique patterns and colors on their skin make them look like clumps of moss growing on rocks. This very effective camouflage allows the frogs to blend into their muddy and mossy environment with ease. 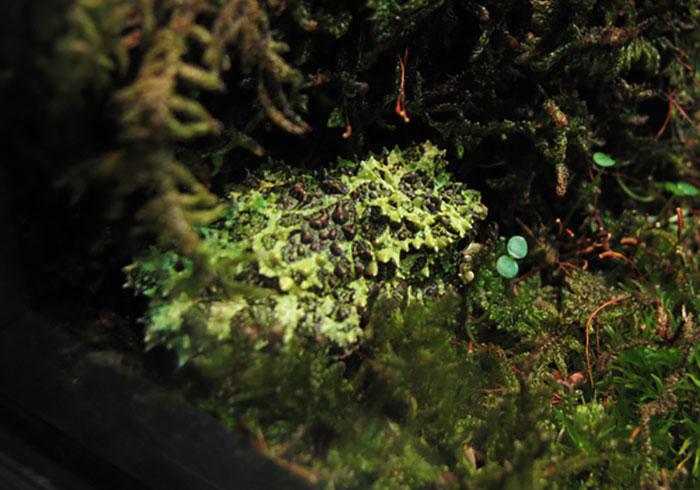 The combination of the Vietnamese mossy frog’s green body, black spots, tubercles and spines makes it look like a clump of moss, which it spends a large portion of its time pretending to be. Native to Vietnam, these frogs live in mossy caves and in the banks of rocky mountain streams 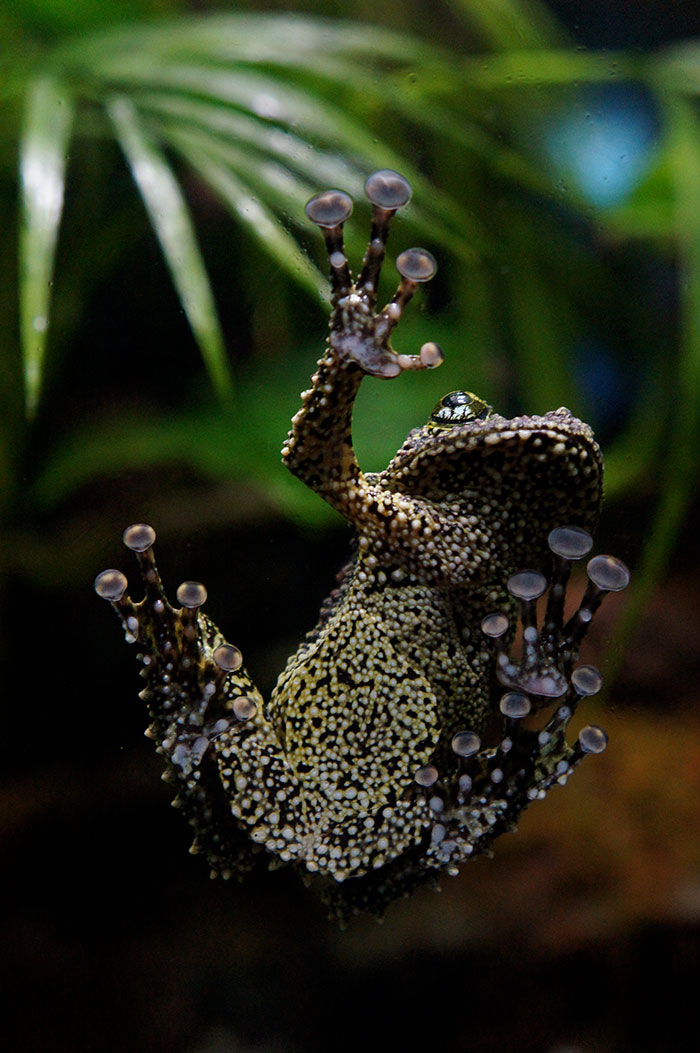 Vietnamese mossy frogs greatly resemble a clump of moss thanks to their green color, black spots, and visible tubercules and spines. They hide in basins of water found in crevices with only their eyes protruding to keep a watchful eye on their surroundings. As a result, they’re almost impossible to spot when sitting still. These tree frogs have adhesive toe pads and can jump. Males have a pronounced breeding callus on the base of their inside finger. 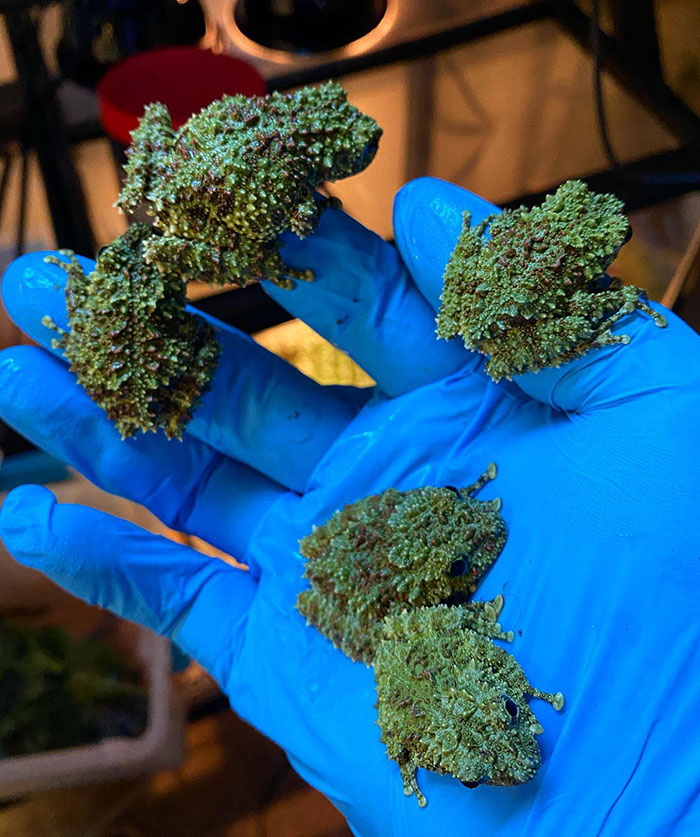 Mossy frogs are about 61 mm (2.4 in) in size, but females are usually larger than males and can reach sizes of 8–9 cm (3.1–3.5 in). Their natural habitats are primarily evergreen rainforests and subtropical forests across southern Asia. As its name suggests, the Vietnamese mossy frog lives in Vietnam; specifically in northern Vietnam, a region defined by limestone cliffs and evergreen rainforests. 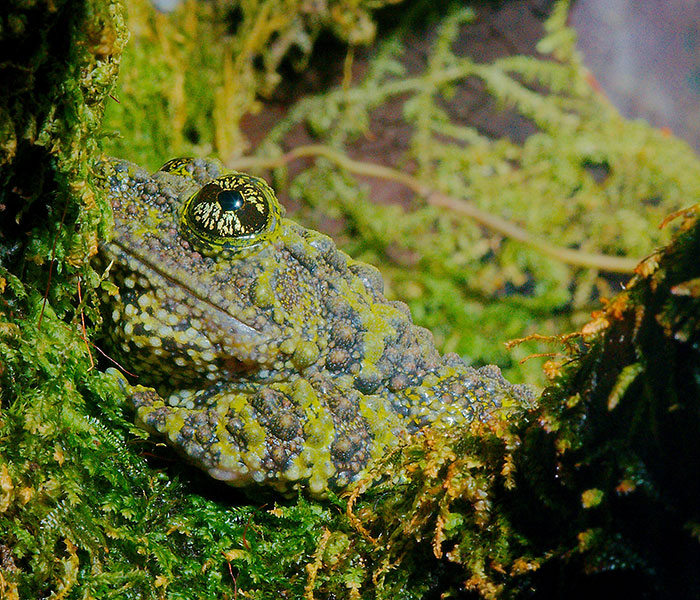 Vietnamese mossy frogs are found in flooded caves and in the banks of rocky mountain streams at elevations of 2,300 to 3,280 feet (700 to 1,000 meters). This semi-aquatic species spends much of the time hiding in the water under rocks and floating plants. They will also attach themselves to rock crevices, appearing to be moss. Mossy frogs are nocturnal and live in fairly cool realms, so no special lighting or heating is required. A temperature range in the mid-70-degrees Fahrenheit works great. Anywhere between 65 to 80 degrees is tolerable. 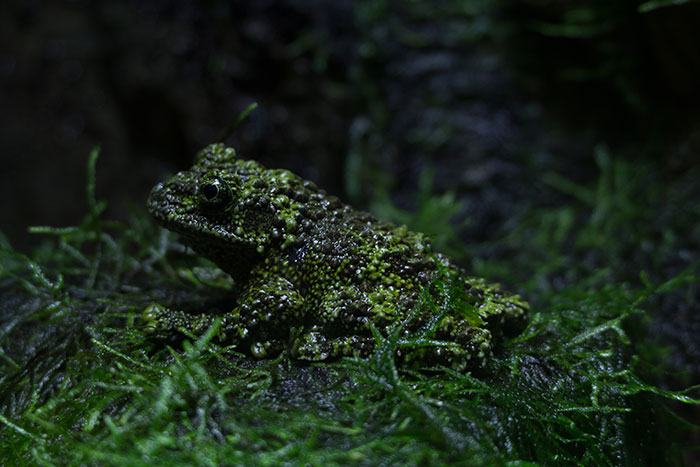 Vietnamese mossy frogs can throw their voices up to 10 to 13 feet (3 to 4 meters), making it extremely difficult to find them in the wild. Mossy frogs hunt large insects such as crickets and cockroaches. At the Smithsonian’s National Zoo, they eat a diet of crickets, cockroaches and earthworms 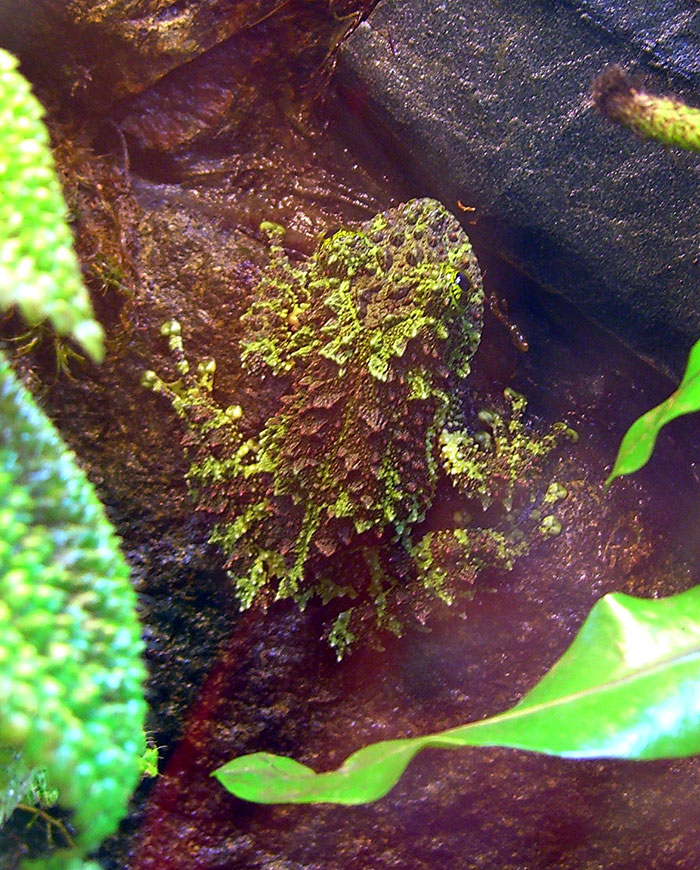 Mossy frogs are shy and should not be handled unless necessary. They are easy to keep, trouble-free and make great display animals if you can spot them in plain view. They are masters of camouflage, which makes them pretty neat. Great for both beginners and advanced hobbyists. 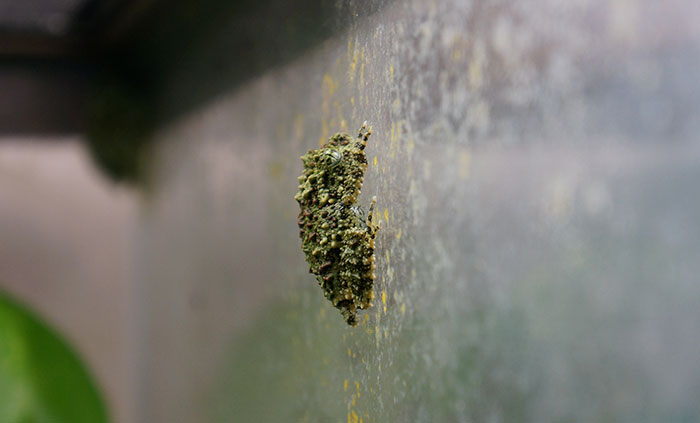 Vietnamese mossy frogs breed in rock cavities where water has flooded the floor. A clutch of eight to ten eggs is deposited above the water to protect them from aquatic predators. The eggs hatch in seven to 14 days and the newly hatched tadpoles drop into the water directly below them. Metamorphosis from tadpole to frog takes about three months. This species has been bred in human care. When Mossy Frogs are quietly resting, they flatten out and in low profile appear to be as wide as they are long. In this posture and aided by their coloration, they almost disappear into rocks covered with moss, an adaptation that can be an effective way to hide from predators or silently watch for prey. 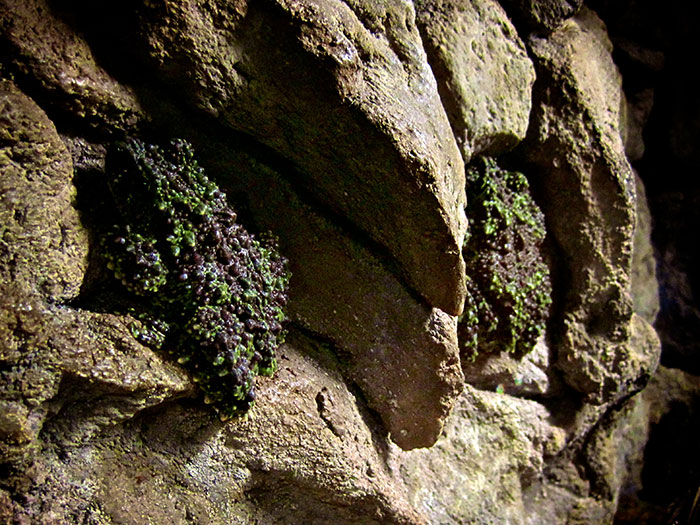 Vietnamese mossy frog (Theloderma corticale). Long considered the mossy frog, this is the largest of the commonly available (figuratively speaking) species of Theloderma in the hobby, with adult females approaching 3½ inches in length. While it is the most commonly available species, and is easily bred, finding females can be frustrating 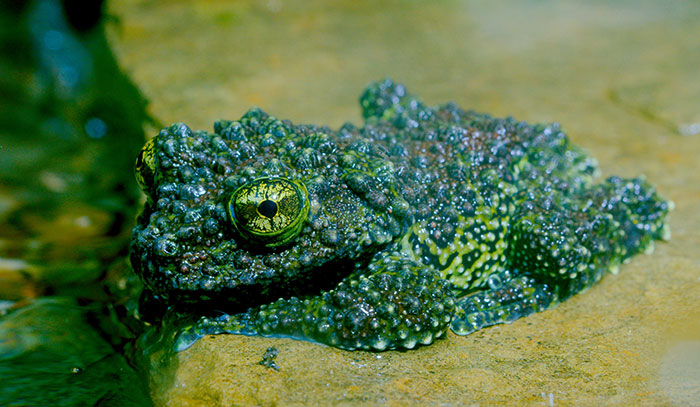 Mini mossy frog (T. bicolor). This small member of the genus is relatively new to the pet trade, having only been available in substantial quantities in the past few years. A small number of animals are imported every year from Vietnam, where it lives in tropical montane forests. Large adult females may reach 2½ inches, though typically remain closer to 2 inches