Footage of an endangered white rhino trained to perform in a circus has prompted an outpouring of anger and calls to boycott shows featuring live animals.

Social-media users were furious at the videos taken in Russia showing a rhino being forced to parade or carry a man on its back in a circus ring, while the trainer holds whips at the ready. Rhinos are rarely seen in circuses, although elephants have long been used – and are being phased out following years of protests about cruel training and the unnatural conditions they are kept in.

In a clip circulating online taken at the Russian State Circus, the rhino is made to sit and let the trainer clamber onto his back before setting off to tour the ring. A couple of times the animal also appears to turn away quickly from the trainer as he approaches with a whip.

In another clip, suspected of having been shot at the Safari Circus in Moscow, what is thought to be the same rhino is seen on a circular platform under a bright spotlight, hesitating several times before stepping off.

Experts in wild-animal welfare said using a white rhino – which can weigh up to 2,300kg – in public show was extremely risky for the trainer and spectators. “It could quickly cause injury to the trainer, and if there isn’t a substantial barrier, to the public,” said Chris Draper, of the Born Free wildlife charity. “However well trained it is, rhinos are naturally nervous and impulsive.

”The animal, probably hired out from one circus to another, would have been trained using cruel, painful methods behind the scenes to perform as instructed, he said. 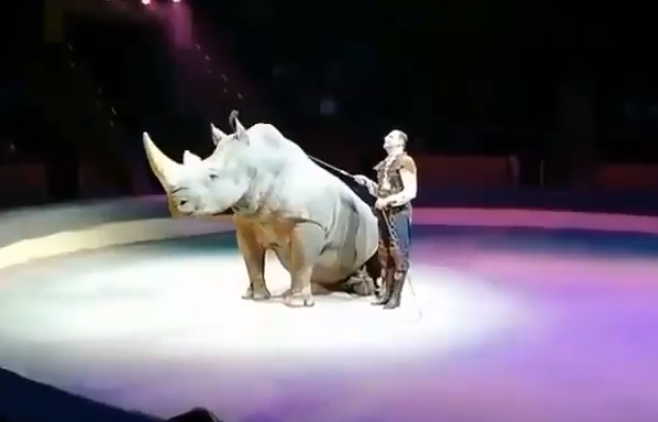 “To see the animal in this circumstance when you’ve seen one in the wild is utterly incongruent,” he said. “Not only is it being exposed to substantial noise, but the use of the whip is wrong. They would say it doesn’t hurt, but if that’s the case why use it at all?

”Transporting the rhino around would also inflict stress and strain on him, Dr Draper added.

In a separate video, the rhino, Mafa, is filmed away from the ring, being fed by the trainer, Sergey Nesterov, who says: “I put a bed next to it, and I left it only when I had to eat, in order to spend more time with it. This way it got used to people.” 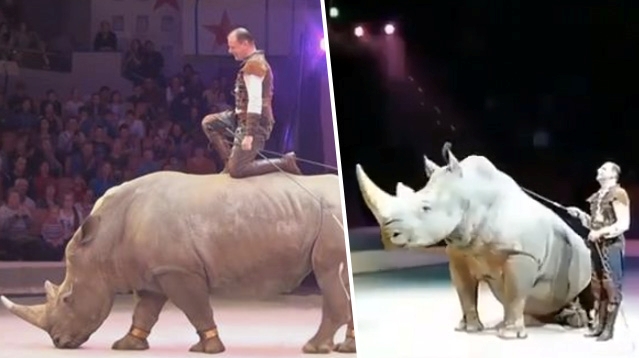 Mr Nesterov says it took a year to arrange the paperwork to transport Mafa from South Africa.

The Safari Circus’s website states that it uses exotic animals, and said that in 1996 Sergei Nesterov and Elena Fedotova decided to create a new attraction with exotic animals based on an older one created by Elena’s parents. 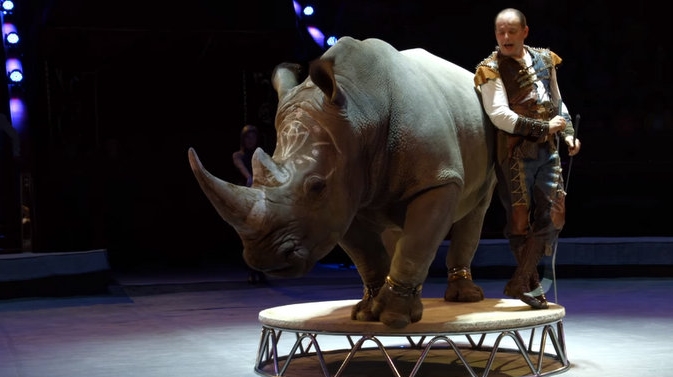 Safari’s site features photos of the rhino, as well as shots of a kangaroo with a chain around its neck and boxing gloves on, apparently sparring with a human. There are also photos of five white tigers in the ring with the trainer. Facebook and Twitter users condemned the use of the rhino, saying the animal belonged in the wild and had not been domesticated like a cat or dog.

The behind the scenes of the white Rhino of the Russian circus. Outrageous!!!! pic.twitter.com/buXw4k1Q8J