This is the heart-warming moment a huge elephant falls asleep to the sound of a woman singing at an animal sanctuary and rescue centre in Thailand.

The footage was captured by a staff member at the Elephant Nature Park, which is based in the Mae Taeng District of the Chiang Mai Province, and initially shows the mammal on her feet.

These elephants have been through a lot of hardship in their lives, but the fact that they can open their hearts to a kind caretaker truly shows their loving character.

According to the sanctuary, the woman named Lek has somewhat of a positive rapport with the elephant called Faamai and has been helping her get to sleep for years. In the video, Lek begins singing softly while approaching the animal – which reacts by pulling her in for a hug with her long trunk.

The woman continues to sing while walking around the mammal before using a piece of cloth to bat insects away from her eyes. 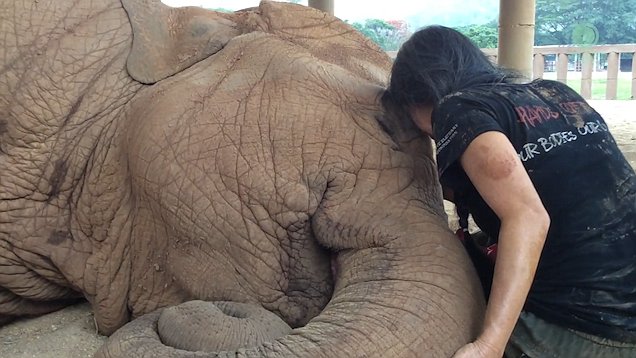 Feeling sleepy, the elephant slowly drops to her knees before collapsing on the ground.