Man Raises Orphaned Grizzly Bear And Now They Are Inseparable

Whoever says a huge 800lbs wild animal couldn’t be the perfect fur companion, this guy in Montana has one thousands reasons to prove them wrong! 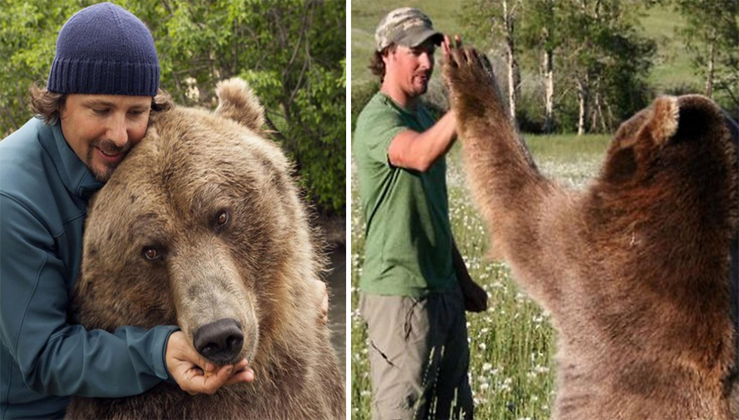 Ever since he was a little boy, Casey Anderson had a great fond for wild animals. And since he grew up in Montana, bears were always at his heart. The 44-year-old man dedicated his career, actually, his life we might say to protect and conserve those majestic animals. More that, he always tried to educate people about what wilderness means and how do we have to respect it.

But his distinctive connection with the Grizzly bears is actually a result of his incredible bond with his best mate, Brutus, a 800lbs bear. The two are knowing each other for many years, since the huge animal was just a months old cub.

Back then, Casey found the helpless creature abandoned in the Alaskan mountains. Most likely the little bear lost its mom due to hunting. Without hesitating, Casey, who’ve always been an animal lover, took the cub to take care of him. Fortunately, for both of them, what it should have been a short period of time connection (until Brutus would have been ready to get back in the wild) turned into an inseparable friendship.

“This connection goes beyond just taking care of Brutus,” Casey told Oprah. “They’re very, very emotional animals… When he was a little baby, I was bottle-feeding him and I looked down in his eyes. He had a little tear in his eye. I just kind of chalked it up to [him] straining as he was sucking down the bottle. Several years later, Brutus got a bit of a bellyache. In his eyes, he had the same tear. At that moment, I realized that grizzly bears can feel the same emotions we do.”

Just like a very best friend, when he found himself in some difficult times, Casey found such a great comfort in Brutus. “I was having a hard time, was really upset about some things… I was crying,” Casey said. “I could see that he wanted to take the pain away from me. He came up to me very gently and nudged me. He just stood by me unconditionally and he listened to me and he was there when I was crying. It’s truly what I needed from him. This relationship is a give-and-take.”