These adorable pictures of a mother gorilla cradling her newborn baby in Bristol Zoo are going viral. The baby gorilla was born on August 19, while the tender moments between the baby and its mother were captured on camera by a zoo photographer when the bundle of joy was less than two weeks old. 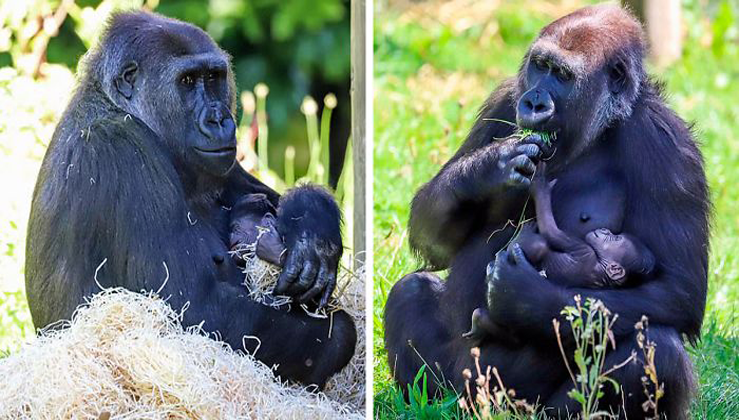 The newborn, who is yet unnamed, is seen gazing up at mother with love and also trying to snatch some snacks from her. But 9-year-old Kala is able to convince the newborn that her milk is a more suitable choice. This baby momma welcomed her baby back in August. According to Lynsey, both Kala (who came to the zoo from Germany back in 2018) and her newborn are doing well. “She is being very attentive and taking good care of her baby,” she shared. “It’s very early days but we are cautiously optimistic. The early signs are good and the baby looks to be a good size and is strong.” 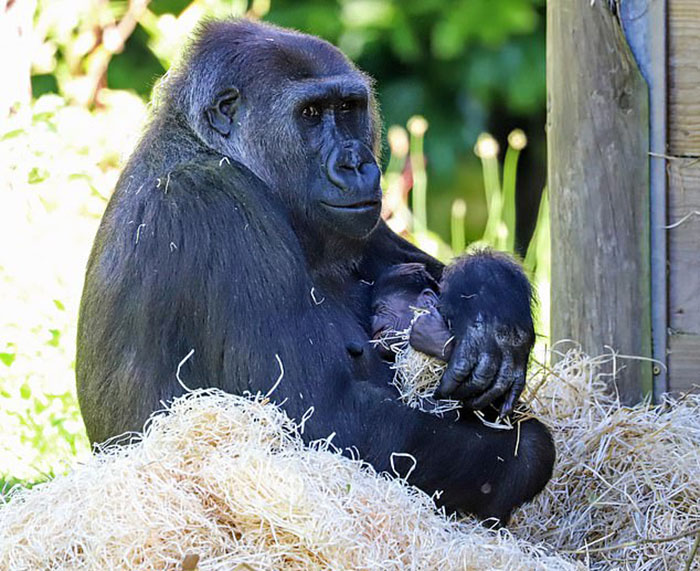 Sadly, Kala’s first baby, who was born last September, died when it was younger than just one week old. The mother gorilla went through an emergency cesarean section, as she had a low-lying placenta that blocked the birth canal, thus preventing the baby from being born naturally. While the zookeepers and vets closed the zoo’s Gorilla House to give the mother and her baby some needed time and space to bond, the baby failed to thrive. She underwent an emergency cesarean section; however, the baby died a few hours later.

Luckily, Kala’s recent pregnancy was a happy one, and the pair are clearly enjoying their moments together. “The new gorilla joins our troop of six gorillas, which are part of a breeding programme to help safeguard the future of western lowland gorillas,” Bristol Zoo explained in a press release. The pair are seemingly bonding. 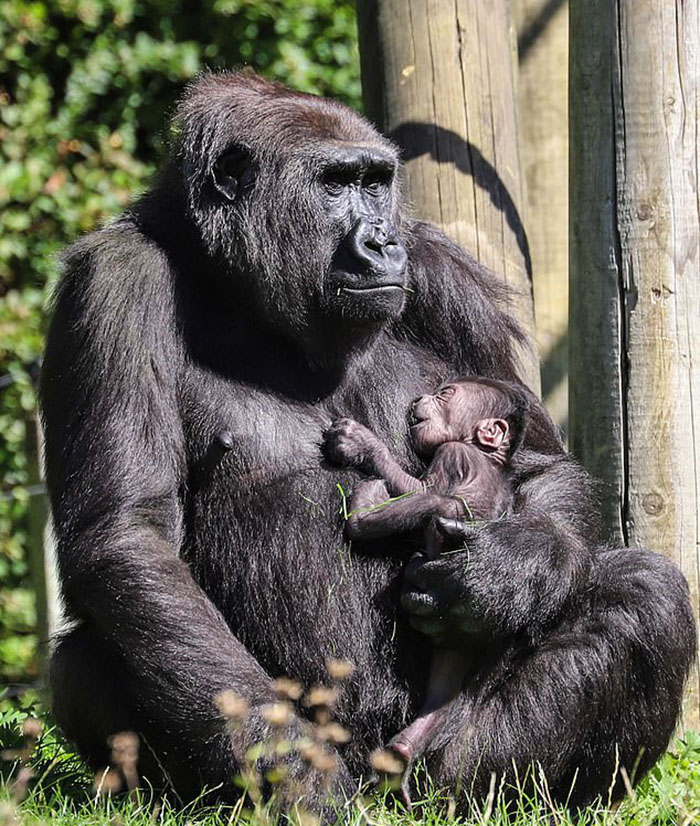 Western lowland gorillas are now critically endangered. They originate from Cameroon, in the region of West Central Africa. In the wild, many gorillas are shot by hunters who are participating in the bushmeat trade. Unfortunately, Kala belongs to one of the most critically endangered species. Therefore, the keepers at Bristol Zoo are ecstatic over the adorable baby who joined the other 6 gorillas at the zoo. 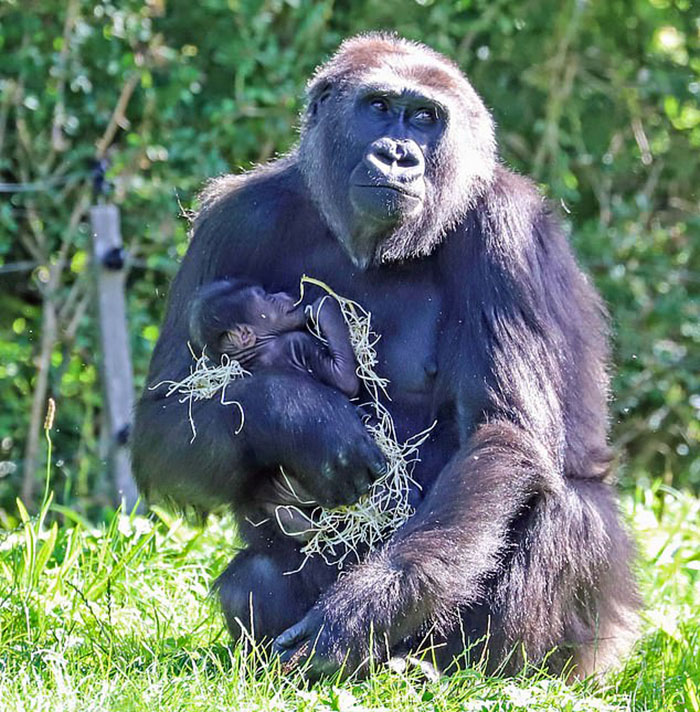 However, the sex of the baby is still unknown. “The baby is definitely looking very strong and healthy and is getting hairier and more alert. Kala continues to hold the baby very close which makes confirming its sex more difficult, but we hope we’ll be able to announce the sex of the little one very soon,” the press release from Bristol Zoo reads. 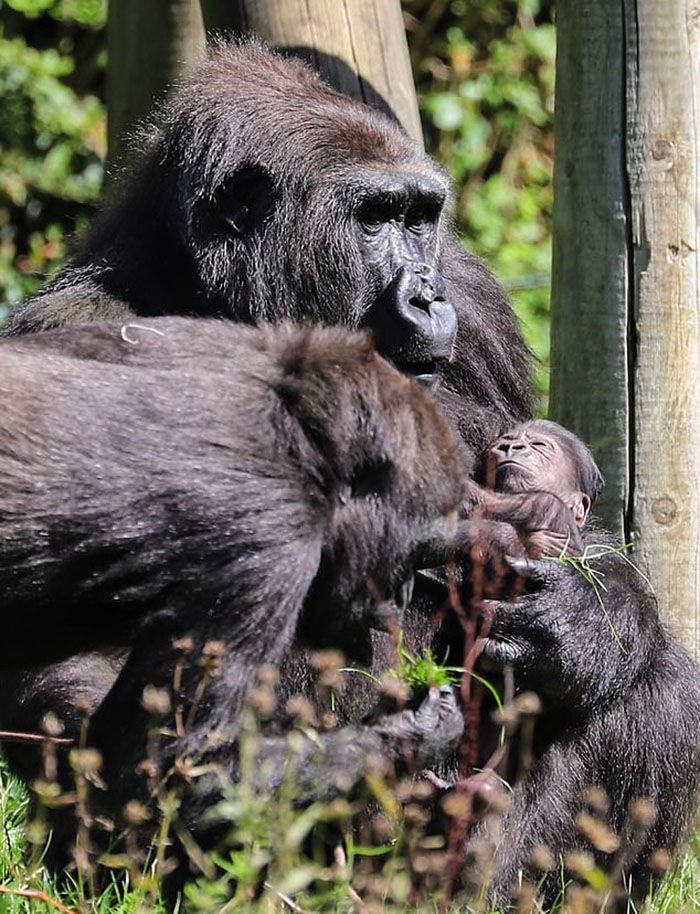 Apparently, the baby is bonding with other gorillas as well: “The baby’s half-siblings, Afia and Ayana, continue to show great interest in the newest addition to the family troop, which is great news—we are sure the youngster will be a great playmate for them before too long. It’s also a great learning experience for them, showing them the skills they’ll need when they become mums themselves.” Image credits: Bristol Zoo Gardens