The coronavirus pandemic has locked us inside our homes, and during the past several months, we have been encouraged to explore our local areas only, as international travel has been restricted. 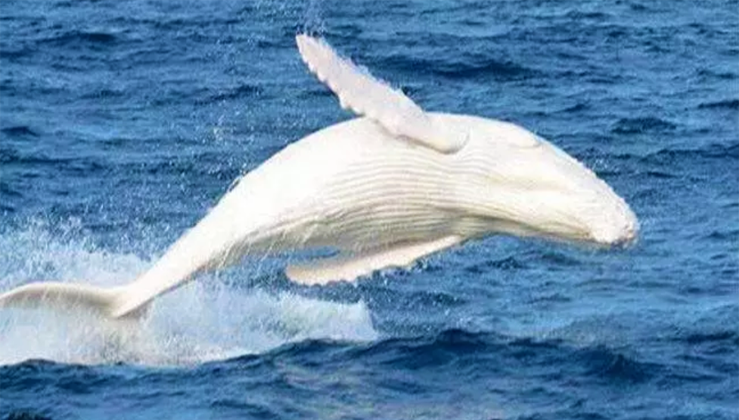 Therefore, for now, only residents of Australia’s east coast will be given a chance to marvel at the beauty of their most popular whale- Migaloo! For the first time this season, the most famous humpback whale in the world has been reportedly spotted on June 15, making his way north along the east coast of Australia on his annual migration. The Pacific Whale Foundation claims that Migaloo might be the only pure white adult humpback in nature. The White Whale Research Centre and Great Barrier Reef Legacy opened a Twitter account for Migaloo to inform people about his movements. 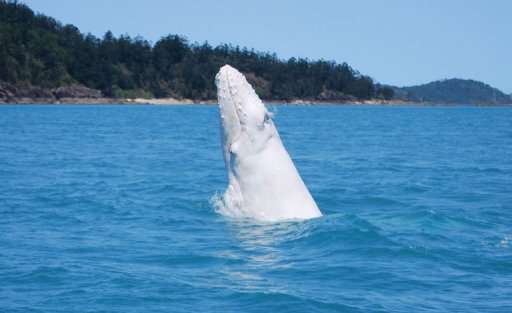 The Twitter account said that “a white whale, possibly Migaloo, has been sighted along the NSW South Coast heading north”, and predicted that he will “past Sydney anytime soon and Cape Byron anytime from Wednesday this week.” Experts believe Migaloo was born in 1986. He was first spotted in 1991, passing Byron Bay, and since then, he has his own fans who capture him on camera and video. As the first photo of him was taken from over 5 km away and through a telescope, it was not possible to determine if he was entirely white. 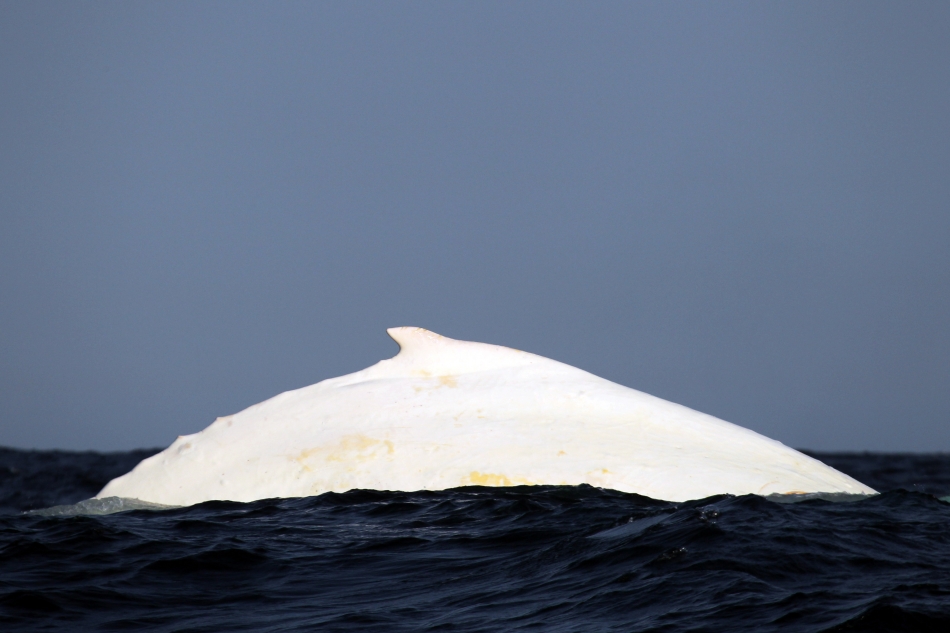 In 1993 Pacific Whale Foundation researchers encountered this amazing white whale in Hervey Bay, Queensland. During this encounter, we were able to confirm the whale was all white and in 1998, we recorded the whale singing, a trait distinct to male humpback whales.” In 2004, scientists at Southern Cross University confirmed it through genetic testing. Scientists use markers like the slightly-hooked dorsal fin on his back, and his tail flukes with spiked edges. ”After sharing our remarkable discovery with the public, there was an outcry to ‘name the whale’. It was decided that the naming of the whale should be done by the elders of the local aboriginal collective in Hervey Bay. Ultimately they named this animal “Migaloo” or “white fella”. The elders explained their connection to all white or albino animals and that they appear on earth to be respected and revered; that their unique color demonstrates the need to respect all forms of life even if they appear different than ‘normal’. 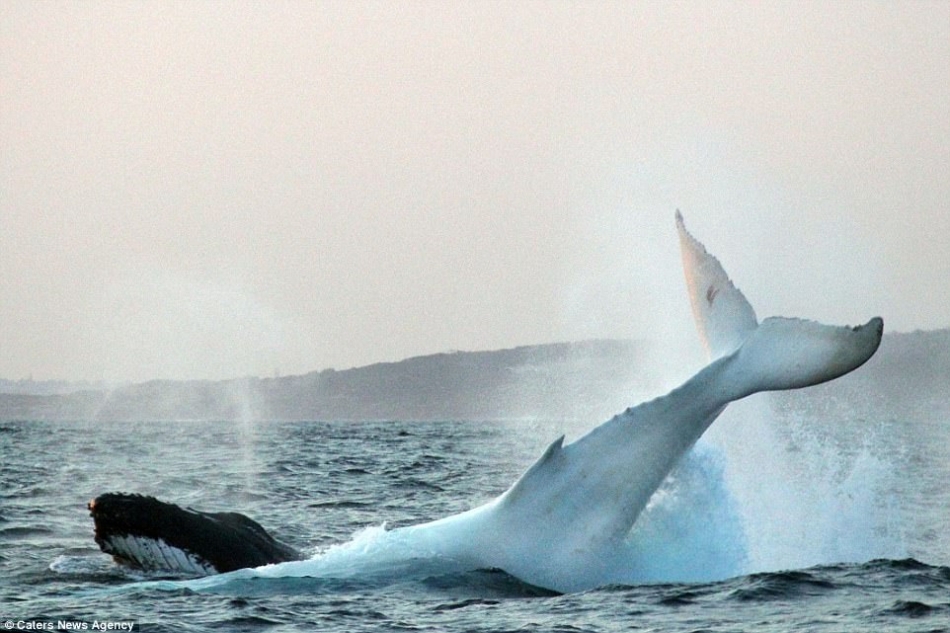 According to the adjunct fellow at Southern Cross University, and the founding director of The Oceania Project, Dr. Wally Franklin, the very rare humpback whale is into his 30s and will hopefully live as long as 100 years: “He is now well and truly fully grown and fully mature. He’s mature socially and physically. It doesn’t appear that he has had any issues with predators and he has an expectation of living as long as 100 years, which is the generally-believed life expectancy. Reports of his sightings have been available for just about every year of his life and so he has been very useful in cataloging whale movements. Those sightings are very valuable in confirming migratory timing.” 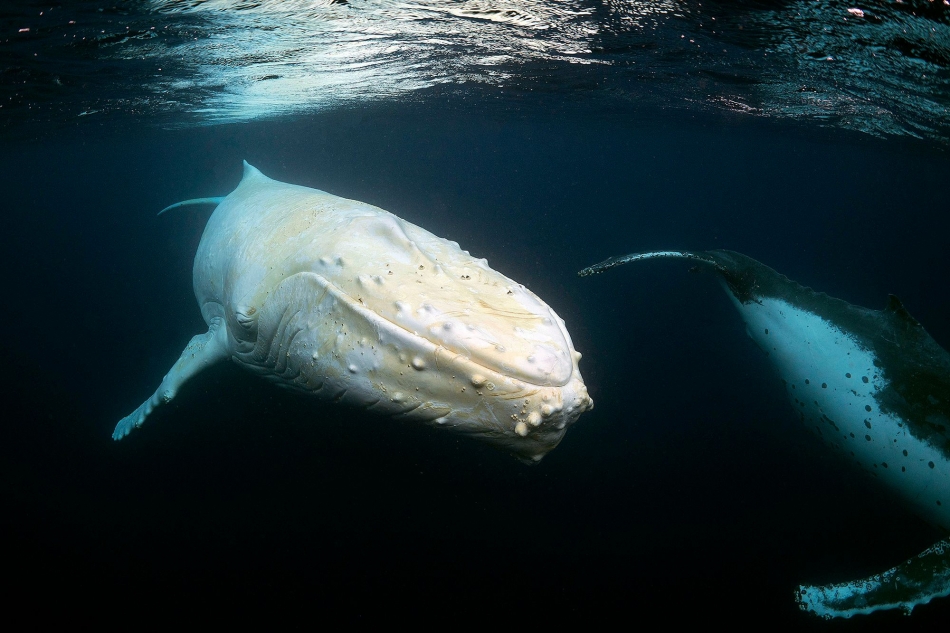 Migaloo was the first white whale ever sighted, but he now swims with 3-4 other known white humpback whales: Bahloo, Willow, and Migaloo Jnr. Migaloo Junior was sighted in 2011, in the Whitsundays, but it is not known if he is the offspring of Migaloo. This whale “does have one small black dot on the dorsal surface of his left fluke, meaning this whale likely has a condition called leucism instead of albinism.” All humpback whales are protected under Australian Federal law, but Migaloo and other humpback whales that are more than 90% white are “special management marine mammals” and have extra protection. They cannot be approached within 500 meters by boats and vessels, and within 610 meters by aircraft. These laws resulted from an incident, when Migaloo was struck by a boat in 2003 and got scarred in his back when his fans acted irresponsibly in their excitement. 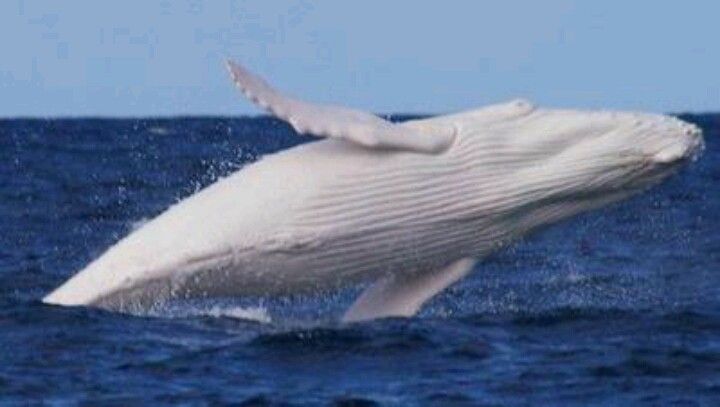 When he reaches Australia, according to Queensland’s laws, tour operator’s vessels are not allowed within 500 meters of the whale, and if they break the rules, they can be fined up to AU $16,500 (US $11,298). At first, Migaloo was not considered albino due to his brown eyes and was called ‘all-white’, or ‘hypo-pigmented’. Yet, in 2011, after an analysis of his DNA, researchers at the Australian Marine Mammal Centre confirmed that he was a true albino, as they found a genetic variation leading to albinism. What a majestic creature! Source Opera News